As Motorola Company has been tied up with Lenovo. After the rumors are confirmed, Lenovo is launching its first Tablet in five years under the Motorola brand. The tablet has many productive features, with optional ThinkPad keyboard accessory.

The Moto Tab feature has a Full-HD 10.1-inch screen, Dolby Atmos front speaker, and a most advantageous a finger print reader. It has a rear camera and a front camera but Lenovo still does not mention their details. As far specification is concerned it does not impress the user. It has 625 Snapdragon Processor, 2 GB RAM and a 32 GB of Micro SD expandable storage. This is not be enough for heavy gaming, but the 7000 mAh battery should last a quite bit longer- the processor is energy-efficient.

The tablet runs Android 7.1 Nougat with some changes geared towards productivity. Basically, there is a way that puts the Back / Home / Multitask buttons to the left and creates a taskbar to switch between open apps. 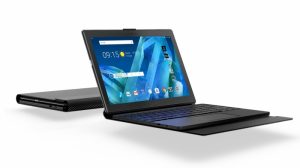 There is also an optional ThinkPad keyboard accessory that connects via Bluetooth. It features an integrated touchpad, plus a kickstand to keep the screen standing; and functions as a cover for the keyboard. The built-in battery has 4000 mAh.

You can configure up to seven different user profiles, and register fingerprints for each of them. There are also Kids Mode, made for kids accessing just a few specific apps and websites.

In addition, Lenovo has incorporated some entertainment features. You can swipe left on the home screen or lock screen to access TV Mode; this opens the DirecTV app or another video service. And we have an optional 3W speaker that connects to the tablet via USB Type-C and loads the device. 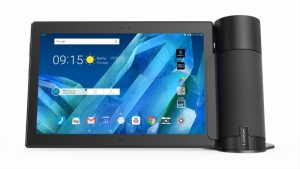 As noted by the Android Police , the Moto Tab is very similar to the Lenovo Tab 4 10 Plus : they have the same design, processor and battery. There are some differences, however, especially in RAM and in storage.

This is not a big boost as was the Motorola Xoom , but things have changed a lot in the tablet market from 2011 to here. Moto Tab will be sold exclusively by US operator AT & T for $ 300, and will be available as of Friday (17).