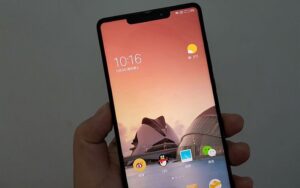 Xiaomi has become the largest selling Android phone of this Year. Like Redmi 4, 4a has been a successful variant of the Xiaomi company.

After the success, they are planning to launch a third-generation Mi MIX edge-to-edge display smartphone. If you see the new image which is leaked you will find the iPhone X-like notch. Some Chinese has leaked images of new upcoming Mi MIX 2s which is expected to be an upgrade of the current Mi MIX 2 smartphone. The Above image shows alleged handset in the wild and tip a notch at the top of the handset just like the famous iPhone X.

As all the rumors about Mi MIX 2s all over the social media, we advise readers to take information about this smartphone as Xiaomi has yet to make any official announcements about its new smartphone and the credibility of the sources cannot be independently verified.

The last variant of this Company Mi MIX 2 the premium bezel-less smartphone manufactured by the Chinese company, is currently on sale in some the Indian markets. The Xiaomi Mi MIX 2 price in India is About Rs 35,999.

Related:  Windows RT 8.1 Has Been Successfully Installed On Lumia 640

Currently, we only have this much information about the new upcoming variant of Xiaomi Mi MIX 2s. Stay tuned for more updates on the official announcements made by the Company. We will update our readers as soon as we get some more information.