Due to increasing price of Bitcoin massively, the demand for energy also increases upto 30% in past one month. For mining bitcoin it also consumes more and more electricity.

As per estimation Bitcoin mining consumes a total of 29.05 TWH per year, which gives about 0.13% of global energy demand.

Mining already spends more electricity than Ireland, Croatia, Uruguay and Ecuador. In Africa, only three countries consume more: Egypt, South Africa and Algeria (countries in gray, in the map below). 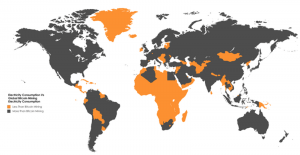 If anyone is looking to mine bitcoin then Electricity is the biggest cost. As looking in the growth rate of Bitcoin, now many people are interested in mining, it is increasingly difficult to get a fragment, as the blockchain is programmed to increase the difficulty on demand. As a result it requires more power from machines attached to the node and consequently requires more energy expended.

For mining ordinary computer is not acceptable. Today, mining bitcoin is only possible in super computer with high configurations. So-called AISCs have greater computational power, as they can have multiple video cards in them. Many GPUs connected at the same time, more electricity consumption.

As per the survey of last 30 days, when bitcoin enters in $ 25 thousand, there was a 30% increase in the consumption of computers connected to the network. If this growth rate is maintained, in coming Year 2018, mining activity will spend more electricity than UK– today, it already spends more than 20 countries in EUROPE. By 2020, it would consume more than all countries in the world.

On the consumption of energy for bitcoin , Brazil is in the 8th position. The mining activity of the digital currency consumes the equivalent of 5.61% of Brazilian demand. According to Power Compare, if all the machines connected to Bitcoin’s Blockchain were a nation, this fictitious country would occupy the 61st place in consumption.