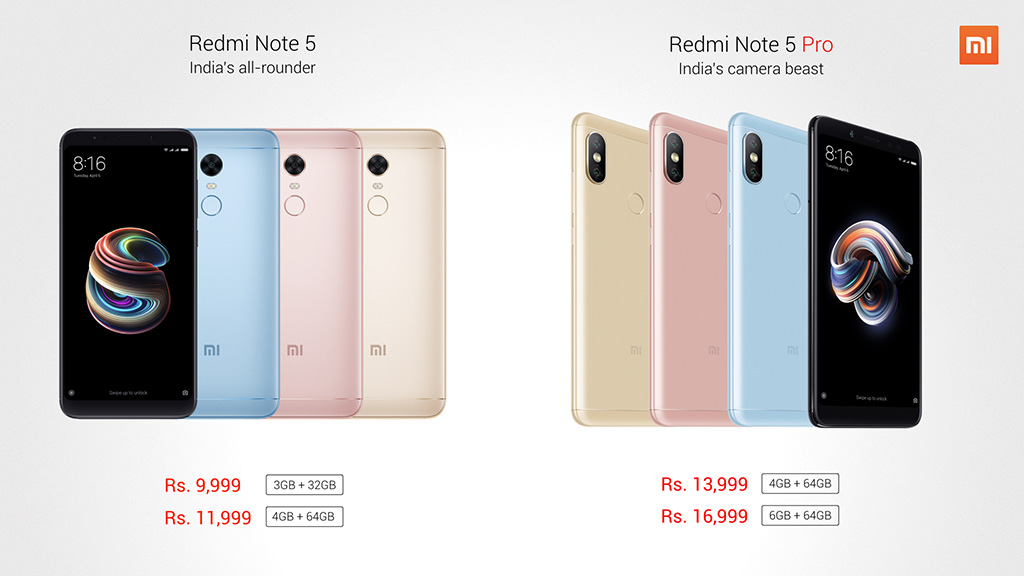 Recently, at an event in India, producer Xiaomi has officially launched two of its latest smartphone is Redmi Note 5 and Redmi Note 5 Pro. Among them, the most prominent is the Redmi Note 5 Pro with dual camera design placed similarly to the iPhone X.

The first is the Redmi Note 5, which is actually the international version of the Redmi 5 Plus that was previously released in China. The device owns a 5.99-inch screen with a resolution of 2160×1080 pixels (18: 9 aspect ratio). In terms of configuration, the phablet comes with a built-in Snapdragon 625 processor, 3 / 4GB optional RAm, and 32 / 64GB of internal memory.

Other specifications include a 12MP main camera, af/2.2 aperture, a 5MP front camera, a 4000mAh battery, and an Android 7.0 Nougat operating system interface with the MIUI 9 interface.

Meanwhile, the Redmi Note 5 Pro will carry the power of the Snapdragon 636 processor, Adreno 509 GPU and optional 4 / 6GB RAM, 64GB of internal memory. It also features a 5.99-inch FullHD + display and a 4000mAh battery that supports fast charging technology.

About the camera, the Redmi 5 Pro features a main camera cluster that includes a 12MP (f / 2.2) sensor and a 5MP (f / 2.0) sensor that captures the depth of field. Meanwhile, the front camera of the machine will have a resolution of 20MP and support face unlock technology.