Best Selling Smartphone In The World

According to Canalys , the iPhone 7 was the world’s best-selling smartphone in the third quarter with 13 million units. Second, there is another Apple device: the iPhone 6s, with 7.9 million units. (These numbers do not include Plus models.) 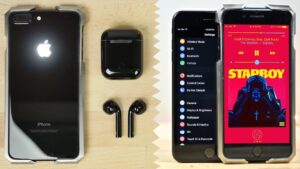 The top 5 is completed by Galaxy J2 Prime , Oppo A57 and Oppo R11. Worldwide sales of smartphones reached 375.9 million units, an increase of 5.9% over the same quarter last year.

The iPhone 8 does not appear in the top 5, which is expected, since it was available for only nine days of the quarter. Still, Apple sold 5.4 million units of the iPhone 8, and 6.3 million of the iPhone 8 Plus.

During the presentation of the financial results, Tim Cook said that the iPhone 8 and 8 Plus “have become our two most popular iPhone models” without revealing numbers. Canalys seems to disagree: while they sold 11.8 million units, the iPhone 7 and 7 Plus reached 14 million at launch. Samsung is first in the smartphone sales with 82.8 million units in the third quarter, up 8.2% in a year. His main highlight was the Galaxy J series, particularly in India and the Middle East. Galaxy Note 8 sold 4.4 million units; while the Galaxy S8 and S8 Plus reached 10.3 million in the same period.

Second in sales is Apple, with 46.7 million smartphones in the third quarter. The top 5 also includes the Chinese Huawei, Oppo and Xiaomi.