Youtube channel owner Hacking Jules was able to install Windows 95, released in the last century, Apple’s latest supercell, released in 2017. In a video posted on his channel shows how easily it is to emulate the old system Microsoft’s operating system in the supercell.

The material caught the attention by the speed with which the whole process is done and also the fluidity of the system, that runs without any type of locking or apparent bug.

The video also brings another nostalgia: you can see the device running the game Sim City 2000, one of the great classics of the last century, compatible with the Microsoft system . 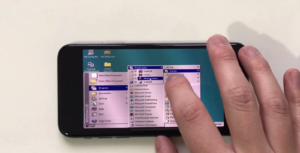 Although it sounds complex, it does not take much technical knowledge to make the process. Everything is done by the Power DOS application, which simulates MS-DOS, the basis of Microsoft operating systems. The software costs $ 0.99 (about $ 3.20) in the App Store .

After you type the start command in Power DOS, Windows 95 starts working. Boot time was a surprise for those who used a computer at the time – and knew how slow it was to turn on the machine and wait until the system was ready for use. However, with state-of-the-art iPhone X hardware, everything happens almost instantaneously. 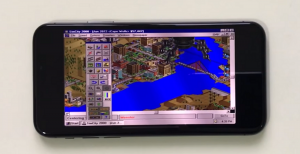 The system appears to be fully installed and includes even the minefield game. Sim City 2000, the Maxis classic released in 1993, also runs smoothly. In addition, it is interesting to see how the system was adapted to work on touchscreen displays. The only compromise is related to the mouse cursor used to control the game.

Check out the following video:

The iPhone X is one of the most powerful smartphones today. The handset features the Aion Bionic hex-core processor, 70% faster than the chip used in the iPhone 7. The phone still has 3 GB RAM and storage options of 64 GB and 256 GB. At a comparison level, the minimum requirement to run Windows 95 is a Pentium 100, 16 MB RAM and only 150 MB HD. In August of this year, the Microsoft system completed 22 years.