What Is Initiative Q And Why Is It Compared To Bitcoin

What Is Initiative Q And Why Is It Compared To Bitcoin 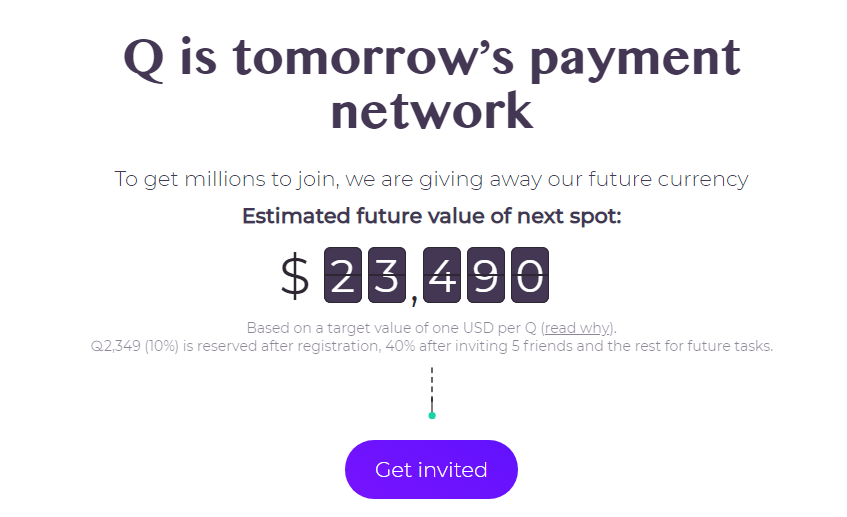 What is Initiative Q?

The official website defines Initiative Q as “the payment system of the future”. The idea is based on one of the premises that helped to promote the crypto-coins: create a universal digital currency, which can be used anywhere in the world, dispensing with the need for money on paper or cards.

Still according to Initiative Q, using the technologies for payment systems that have existed for years, but that are not available because they depend on massive use. The idea, then, is to change this scenario by distributing resources – such as the Q currency – to the first users who register.

This is where the wave of invitations begins. You can not register just by visiting the official website. You must access one of the invitation links that are being distributed virally on social networks and services such as WhatsApp. Active participants need to complete some tasks to receive the Qs. The main one? Distribute invitations.

Every incoming user gains a certain amount of Qs as long as he or she completes the tasks. But as the number of members increases, less is the reward given to new members. The Initiative Q itself indicates that the sooner the registration is made, the greater the reward.

The Q coin is a crypto-currency similar to Bitcoin?

Q’s proposal is to be a digital currency, but not a crypto-currency. In fact, Q’s association with Bitcoin is just a strategy to create a sense of opportunity. In its early years, Bitcoin was viewed with skepticism, but then it was highly valued. The idea sold here is that history can be repeated with Q.

Related:  Taiwan Issued A Ban On The Purchase Of Huawei's Semi-Conductor And Chip Components For TV

But the two projects are very different. Against Bitcoin and other crypto currency, Q’s proposal is to follow a centralized model, with Initiative Q acting as a kind of central bank associated with a monetary committee.

As a consequence, the Q coin will not have a blockchain. One of the reasons for this is to avoid having exacerbated energy consumption in the processing of operations, says the project’s help pages. Safety, in the words of Initiative Q, will be guaranteed with “a robust system of trust and governance.”

Is Initiative Q a pyramid?

Only members of the Initiative Q can invite more people. In addition, invitations made available to each member are limited. Add that aspect to the progressive decrease of the reward as the base of registrations increases, and there is a sense of urgency that strongly resembles the tactics used to propagate financial pyramids.

Despite this, the Initiative Q can not be classified as a pyramid. Not at the present stage, at least. By default, type schemes use money from new members to pass on to those in the upper layers of the pyramid, something that does not exist here. For now, Initiative Q only asks for a name and email address or profile on social networks.

Does this mean that Initiative Q is safe? Are there any risks?

At first glance, there is nothing suggesting danger. Initiative Q does not ask for sensitive data (such as credit card or number of documents) and does not require installing obscure apps, for example. Also, since membership depends on validated invitations – the sender needs to check the new member for the account to be activated – there seems to be little scope for cheating.

Related:  Microsoft Has Confirmed That Windows Phone Has Come To An End

Even so, I would not let my guard down. Care begins with tempting promises. The official website says that “Q rewards reserved today come from a total offer of 2 trillion Q’s.” The goal is to make each Q equal to $1. This goal depends on the wide acceptance of the currency, but assuming that day arrives, the user who got 15,000 Qs at the entrance will have the equivalent of $15,000 to move.

It is a handsome money obtained with little effort. It is true that the $1 value for each Q is just a fairly audacious goal, not a guaranteed promise. But the expectation generated from this is enough for the idea to reach viral proportions.

What worries most is how the collected data will be used. The initial phase requires only name and email, but there is little chance that additional information will be requested later. In addition, nothing prevents real money payments from being made to “make the machine spin” – depending on how it is done, then the movement may be considered a pyramid.

So Initiative Q is not worth it?

As I have implied above, it is good not to lower your guard. At least so far, there is no evidence of fraud, but it all sounds so promising that it becomes difficult not to mistrust.

It starts with the fact that the system does not yet exist. You can not test the platform or have a deep understanding of how Q will work. Currency is just an idea. At the moment, the only tangible thing about Initiative Q is the result of your marketing work.

A well-executed marketing – albeit controversial – because it is based on tactics that arouse strong interest:

Related:  Vivo V17 Pro Goes on Sale in India, Things to Know Before Buying It

These tactics do not characterize fraud, but they are a strong indication that the currency may not be so revolutionary. At least for now, everything seems to be a utopian plan.

How to get an invite for Initiative Q?

We have a invite link for all our users and they can signup just by clicking on the below link.