Microsoft is planning to launch a feature that allows to transfer photos and videos wireless from Android or iOS to Windows 10 vice versa.

As similar to Airdrop For Mac and iPhone, the device needs to be on same Wi-Fi to send. For this, you need to download an app in your Android or iOS called Photo Companion. 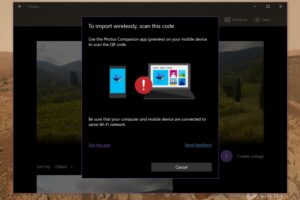 As shown in the image, to get connected you need to Scan a code. Then you need to select the photo which u want to send to your computer. This is as same as Airdrop which runs on the web.

According to THE VERGE it is possible to send photos from onedrive to cloud and import them to Windows 10 Photo application.

In addition, this will also have a feature of stickers, special effect, themes and even video editing tools such as text input and soundtrack.

Recently Windows 10 is also planning to add more tab application so that File Explorer and other programs may have more than one Window running without actually opening another window.