Almost certainly the next-generation high-end Android smartphone will use Qualcomm’s Snapdragon 845 chip, but what exactly are these devices? The list below will give you an answer.

This list is posted on social network Weibo by Kumamoto Technology account, showing the list of smartphones with Snapdragon 845 released from February to December next year. 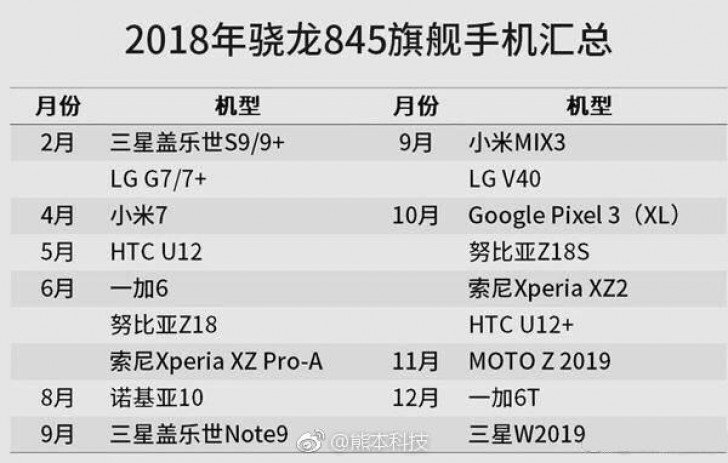 Specifically, in February, Samsung will launch Galaxy S9 / S9 + with Snapdragon 845 chip for some markets. LG G7 will also appear in the same month. In April, Xiaomi Mi 7 launches and May is HTC U12.

June has a lot of products with Snapdragon 845 such as OnePlus 6, ZTE nubia Z18 and Sony Xperia XZ Pro-A. Galaxy Note 9 will be available in September with Mi MIX 3 and LG V40. In October we will have Google Pixel 3 and Pixel 3 XL, Sony XZ2 and HTC U12 +. November is the Moto Z 2019 and December is the OnePlus 6T and the folding phone Galaxy W2019.

Of course, this is just a list of leaks, so it may not be 100% accurate and just a reference.