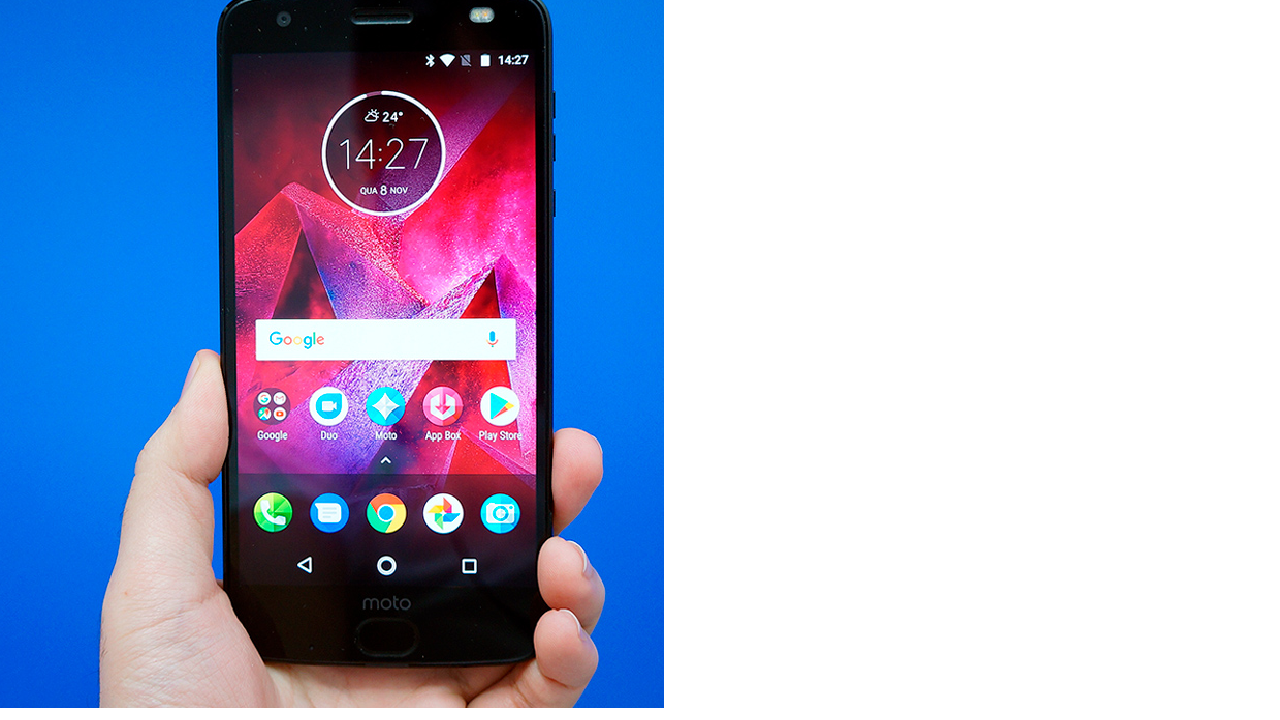 The Moto Z2 Force is Motorola’s premium device for 2017: it has plenty of specs, including a powerful processor and 6 GB of RAM, which does not look ugly compared to the competition. In addition, it stands out for the ShatterShield screen, which does not crack nor shatter.

Motorola has also put here a body made of sturdy aluminum, and a dual camera for depth effects, which can take black and white photos.

The company still bets heavily on the concept of modules: you can fit an extra battery, projector, sound box or other accessories compatible (and sold separately).

Is this enough to compete for space between premium smartphones? Does the dual camera deliver what it promises? And the battery relatively small, hold the stride? We tested the Moto Z2 Force for a few weeks; check out the answers to follow in our review.

The Moto Z2 Force retains Motorola’s key design elements for 2017: the rear camera sits in a circular module, the digital reader is on the front, and the edges remain large.

Of course, magnetic connectors for modules are still present: one of the differentials in the Moto Z line is the Snaps, which allow you to expand the device’s functionality with projectors, 360-degree cameras and game-pads. 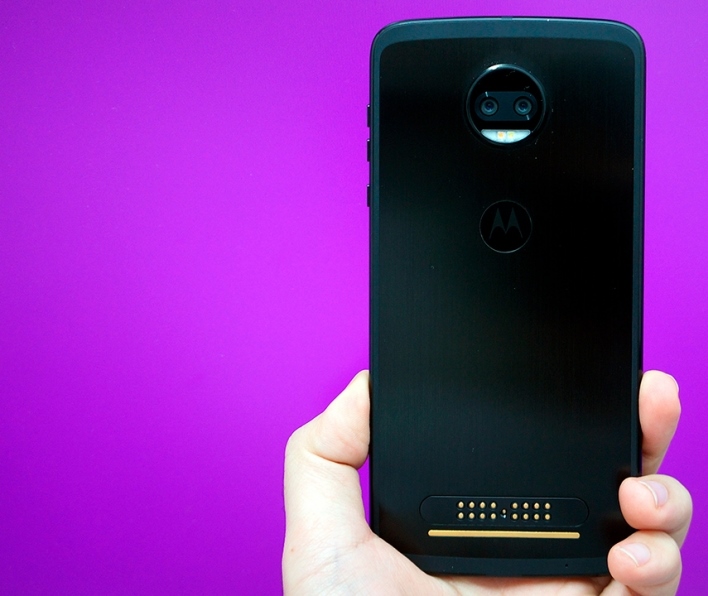 While the first-generation Moto Z has metal and glass in the rear, the Z2 Force adopts a rugged 7000 series aluminum surface. The device gives a solid feel but does not look heavy on the hand; it has 143 g. They are only 6 mm thick, but the beveled edges have a good grip and they do not slip.

Unlike Moto Z2 Play – which has the same thickness – it does not include a traditional 3.5 mm input, just the Type-C USB port. The Z2 Force comes with a headset with P2 connector – and an adapter, of course. I own a Moto Z and I’m used to it: I have a phone for the computer, and another for the cell phone that lives with the adapter. Of course, this can be inconvenient.

We have here only one speaker: it is used for connections and for audio in general, and it produces lower sound that no one would like.

The right side holds the volume and on / off buttons; while the top has the hybrid tray – you can use two chips, or a chip and a memory card. Inside, there is a nano-coating that repels water, but the device is not waterproof. 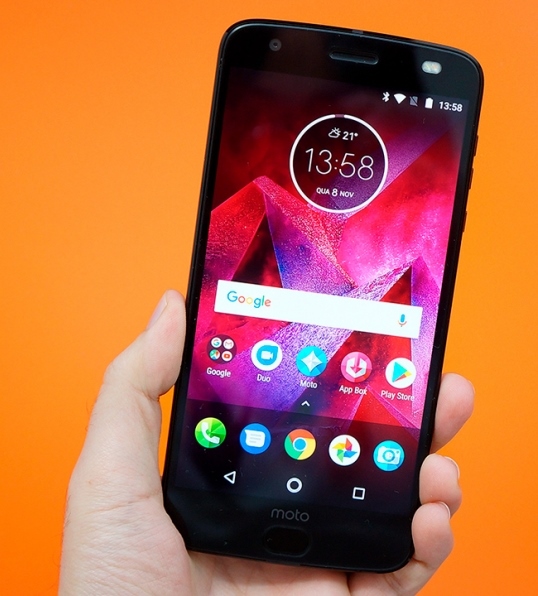 The Moto Z2 Force screen has 5.5-inch Quad-HD resolution with the vivid colors you would expect from an OLED panel. This is the POLED technology, made of plastic instead of glass to not break.

Earlier reports said that this “unbreakable” screen was easily scratched : it suffered minor permanent damage even if you fingered it because the plastic was very soft and flexible. It seems that Motorola has softened this problem, at least in my test unit.

I tried to scratch with nail, but I could not. There were no marks on the screen in the first few weeks, but now I can see some over the logo next to the digital reader. They are not very noticeable in daily use, but if you want to prevent it, it is better to use a film (not included with the device).

Two things annoy me, though. The surface of the screen is slightly raised relative to the rest of the device, meaning your finger will “wipe” the edges every time you access something at the ends of the interface.

This is also a problem to use the navigation gestures in the digital player: you could see the recent apps sliding to the right, or back sliding to the left, for example. However, your finger will be scraping at the edges of the sensor – something so inconvenient that I gave up using it.

Another problem is jelly scrolling, that is, a strange effect that stretches and condenses the elements of the interface during scrolling. For example, when I read a story on Techblogup.com or any other site, the space between the lines seemed to grow as I descended into the text; and returned to normal when I stopped. That was pretty noticeable in the early days, but I just forgot about it in time.

There are not many surprises in the Moto Z2 software, which I prefer. The experience is pretty close to pure Android: it runs Nougat 7.1.1 with a confirmed update to Oreo, and pre-installed apps are almost all from Google (Gmail, Docs, Duo suite).

The exception is for the Moto app. It has three main parts: the Moto Screen displays notifications on the lock screen, and allows you to set the night mode, which reduces the blue light at night.

In turn, Moto Action allows you to rotate the device twice to open the camera; make the “cut” movement to turn on the flashlight; among other gestures you already know. Here, when you pass your hand over the device, the screen lights up on its own; however, this is less sensitive than in the first generation Moto Z.

And with “one-touch navigation,” you can use the fingerprint reader to replace the Android Back / Home / Multi-Tasking buttons. However, as I explained above, this is uncomfortable because of the raised screen: you will shave your finger on the edges of the sensor all the time – so I preferred not to use it.

Finally, Moto Voice became something separate from Google Assistant. The feature is activated by saying “show me”; you can no longer configure your custom command. Basically, you can only see your calendar (“show me my day”), the weather forecast (“show me the weather now”), and open an app (“show me Gmail”).

Related:  Microsoft Released A Series Of Patches For Windows 10 On PCs With AMD Chips

And he does not understand more complex commands, like “shows me the weather forecast in Rio de Janeiro” – it only displays the conditions for your current city. The Moto Voice works even with the screen off, but honestly, I kind of forgot about it.

You can still use “OK Google” with the screen off by going to Settings> Security> Smart Lock> Trusted Voice. However, you will need to allow your voice to unlock the device, which is not very safe.

It’s a step back from what we had since the first Moto X, launched in 2013; but I confess that I keep this feature disabled in my Moto Z (because it consumes a lot of battery in it). 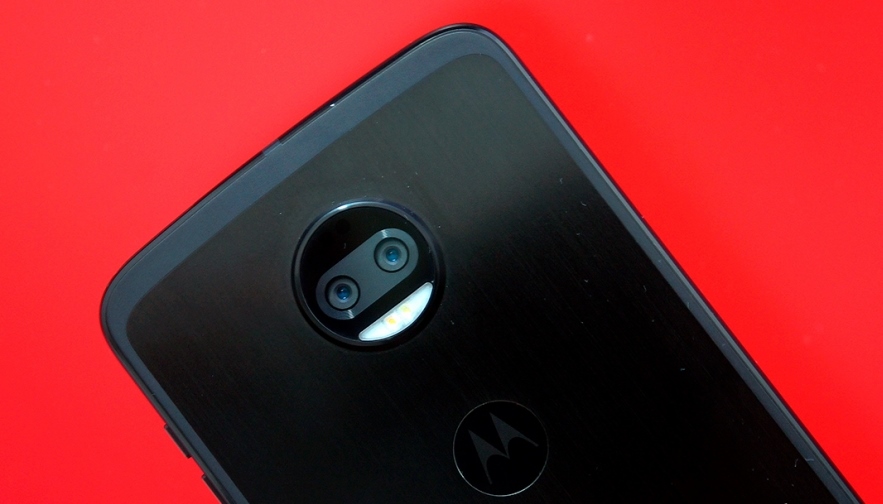 Motorola decided to put a dual camera in the Z2 Force: they are two sensors of 12 megapixels with aperture f / 2,0; one is colored, and the other is monochromatic. The idea is to improve the dynamic range and sharpness of the photos.

In particular, the dual sensor allows you to use the “depth mode” to erase the background. Fortunately – and unlike the Moto G5S Plus – this feature works well most of the time.

The Moto Z2 Force has an 835 octa-core Snapdragon processor, which ensures fast performance most of the time. You will not have problems with heavier games like ShadowGun , Real Racing 3 and Batman: The Enemy Within . However, I noticed small gaps in transitions in the interface, perhaps due to the throttling of the processor; is something rare, but as performance is usually fluid, this becomes something noticeable.

The device heats up under more intense tasks, such as games. You will feel this at the bottom edges and especially at the magnetic connectors of the Moto Snaps. It is not impossible to use or close apps automatically, but it is also something noticeable.

You can keep multiple apps open with 6 GB of RAM. The internal storage is 64 GB, which you can expand with a memory card up to 2 TB – you will have to choose between two chips or a chip and a microSD card. The battery has 2,730 mAh, which is little compared to other current flagships, such as Galaxy S8 and LG G6. It lasted around 10 pm with moderate use: surfing the web, chatting on WhatsApp and Telegram, using Google Maps, listening to music on Spotify and playing from time to time.

At night, Z2 Force was usually at about 20%. It fulfills Motorola’s promise of “battery life that lasts all day,” but you really have to carry it daily – and it can end up faster if you want to play or take lots of pictures.

Related:  How to Completely Delete a File in Linux

Of course, for this problem there is a solution: use the Battery Snap. The Moto Power Pack has a capacity of 2,200 mAh but offers an effective load of only 1,100 mAh – the rest is lost in the transfer to the connectors.

The Z2 Force comes with a 15-watt TurboPower charger that takes the battery to 100% in about an hour. Charging the battery Snap, however, is slower.

It is worth noting here that Motorola has decided not to even include a Style Shell hood to hide the connectors from the rear: if you want one, you have to buy it separately. (Moto Z came with a leather cap.)

The Moto Z2 Force may be the ideal device for a very specific type of consumer: who wants a premium device with pure Android experience and does not want to deal with import; or who really likes Moto Snaps.

If you do not mind having pure Android, the Galaxy S8 is clearly a better option. Everything in it is superior, including design, camera and battery – and the price is very similar. In addition, Samsung often update the Galaxy S line for two generations of Android (just as Motorola does with its line tops). Even the Galaxy S7 is a strong competitor.

But if you really need the pure Android, or the Moto Snaps, there is an option I would recommend more: the Moto Z2 Play . Performance is excellent, the battery is slightly larger, and the headphone jack is still present. You will not have the depth effects on the camera, but you can live without them. Otherwise the price is much lower!

The Moto Z2 Force does not have enough to stand out among the premium smartphones of 2017. The rim-lined design is outdated, the camera is very good but not great, the battery lasts little, and there is no resistance against water and dust. The performance is good, but the competition offers more for the same price range.