Know Why Apps on Your iPhone are Requesting For Bluetooth

Know Why Apps on Your iPhone are Requesting For Bluetooth 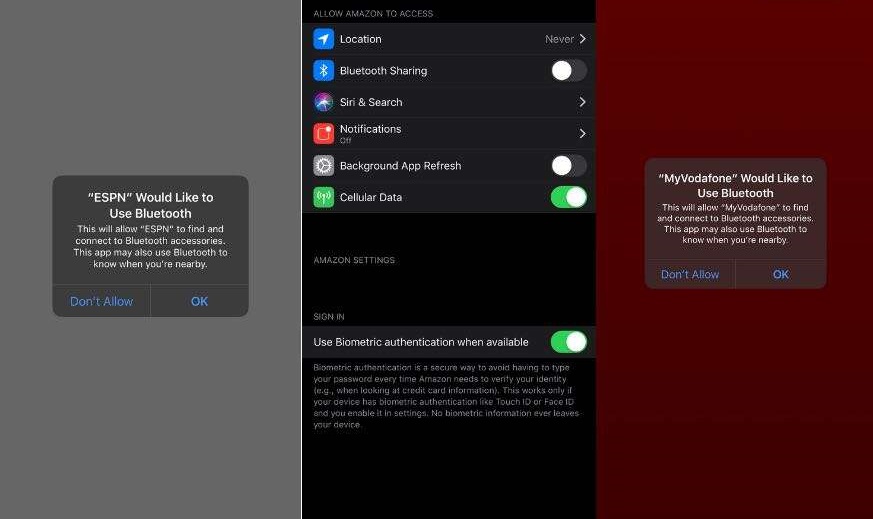 We are also puzzled as same you are until the new Apple iOS 13 came around. According to the things stand with the latest operating system for the iPhones. Apple has made it mandatory for apps to get user consent for access to the device’s Bluetooth connectivity and data.

When we got around to set up my some most-used apps on the iPhone 11 Pro Max running iOS 13. It was really shocking to see how many apps actually request for access to Bluetooth. So what does ESPN, Amazon Shopping, Google Home, Amazon Alexa, YouTube Music and My Vodafone apps need access to Bluetooth on iPhone for?

The reason for this security measure which makes a lot of things clear comes after how apps have pretty much misused our goodness. Also by using the Bluetooth data on our phones to track our general location. Nowadays, Data is the new gold and is now more important than ever. Any data about which mall you visit and at what time, which shops you may have visited, which restaurants you frequent and so on.

Data related to any matter of users is very valuable to the companies. By the way, this setting and the data collected from the Bluetooth feed was totally different. It varies from the Location Data access that you may or may not have allowed. Due to often blatant misuse of these settings Apple has brought this out in the open with iOS 13.

But it does leave a great amount of confusion which a lot of users may not be able to clear at once. The chances are many users would, in the heat of the moment when an app is installed and run for the first time. They will assume that these Bluetooth permissions are required to allow the app to connect with Bluetooth speakers and headphones, for instance.

Thereby they will tap on “OK” instead of “Don’t Allow”. Hence, it will defeat the purpose. Furthermore, it is important to note that the Bluetooth permissions for connecting with wireless speakers, for instance, are handled through the Bluetooth menu in the Settings app. Just like the way you have always paired your phone with Bluetooth speakers and headphones, for instance.

On the phone, we were confused to see Amazon Shopping app want access to the Bluetooth data on iPhone. So why does it have to stream to Bluetooth speaker or headphone? No, the answer isn’t as simple as that. The basic idea is to have a basic clue or your whereabouts and potential shopping and recreational tendencies. All of which is data that can be used to serve you the relevant advertising.

“The app may also use Bluetooth to know when you are nearby,” is the most revealing part of the larger notification that Apple has integrated into iOS 13. This is a flag which is being raised by Apple if any one of us is reading carefully. And this is a welcome measure for users.

It is now up to the app developers to be more clear on why they use Bluetooth data on our phones. If at all they do use and how we stand to benefit from it as users. For now, we really don’t know how giving Bluetooth data to Amazon, ESPN, Vodafone and other companies. Is really going to make our life better. Except that it takes a chunk out of our privacy. And we have denied the request.