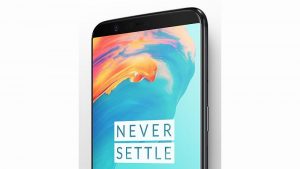 The day many Oneplus lovers are waiting for this event to happen. 16th November Scheduled for Launch event for Oneplus 5T just days away and the company has already started to overdrive mode to create a hype around the handset.

The Company already confirmed the presence of 3.5mm Audio Jack and absence of wireless charging, while the Oneplus 5T price has to be kept in mind. The all screen-successor to the Oneplus 5T will be launched in New York City, and will be available in India via a Flash Sale On November 21, As per Gadgets.Ndtv news.

Now comes the Big thing About the Price of this product.

The Company’s CEO Pete Lau has given a hint that the handset will cost less than CNY 3,999 (Approximately Rs 39,000). This indicates that the upcoming handset may not be priced high compared to 8GB RAM variant of Oneplus 5, though duties and taxes will push the price to Rs40,000 plus in India.

However, a recent report – citing confidential documentation from telecom carrier O2 – claims that its price will be same as the predecessor (Oneplus 5). It may be plan of company to phase out 8GB RAM variant of Oneplus 5 and replace it with Oneplus 5T handset, to find out we will have to wait till November 16. Oneplus 5 8GB Variant price is CNY 3,499 in China, while it costs $539 in US and Rs 37,999 in India.

The company has been heavily teasing about the Oneplus 5T handset all over the social media and has confirmed some of the features available in Oneplus 5T. One of the feature is presence of Audio Jack 3.5mm. Lau also confirmed the name for this handset before the launch date. Previously, on twitter Oneplus tweeted a teaser image of the device pointing to the jack equipped Oneplus 5T, seemingly confirming its presence. The availability of the audio jack would make it one of the flagship that still offer the port, given the iPhone and Pixel 2 range have done away with it.

Besides, all the company’s naming Oneplus has given the Alphabet “T” to distinguish the newest upgrades in the device. As the company first launched Oneplus 3T as the new version of the Oneplus 3.

According to some leaked images and teaser, the Oneplus 5T will be the company’s first smartphone to have a bezel-less display with 18:9 aspect ratio. The this bezel will shift the fingerprint scanner to back of the phone. As Oneplus 3 and iPhone this smartphone also has the portrait mode to capture images with bokeh effect.

Related:  Samsung Galaxy Note 8 For Enterprises Will Have 3 Years Of Security Updates

As some of the leak images also found missing of Home button at the front which has been the part of this Oneplus series since the Oneplus 2 launch in July 2015.

OnePlus co-founders Carl Pei and Pete Lau have been also teasing the camera on the new smartphone. The teasers have tipped a top-notch camera experience on the OnePlus 5T. Some of the executives also posted some images captured by this device and tweeted on twitter some weeks ago.

If the rumors are believed then the Oneplus 5T will come with upgraded dual camera setup that would include Optical Image Stabilization (OIS) and a larger set of image sensor than what was their in the previous version of Oneplus 5.

A chinese retailer listed Oneplus 5T before the official announcement. The leaked retailer listing claimed some of the specification, such as 6-inch Quad-HD-screen with 18:9 aspect ratio and it includes Qualcomm Snapdragon 835 SoC clocked at up to 2.45 GHz. It is likely to come in 6 GB and 8 GB RAM variant with 64 GB and 128 GB respectively.

Now about its camera , the handset is said to be 20 megapixel rear camera coupled with another 16-megapixel sensor, making it a dual camera setup at the back. It is also said to have a 16-megapixel Front camera.

All these specification match with Oneplus 5, however difference include a larger battery 3450mAh and a larger HD-display 6-inch. While with some reports claiming a HD screen resolution of 1080X2160 pixels. It is also thicker than Oneplus 5, weight about 164grams. The thickness is said to be about 7.25mm,but the phone will be slightly wider and taller at 157 X 75.4 mm. The device is rumored at support Global 4G LTE bands and support 34 network bands.

OnePlus 5T also made an appearance at the AnTuTu benchmark suggesting the OnePlus A5010 model name, and listing similar specifications apart from a 20-megapixel front camera, and a boost of the rear camera. The presence of Android 8.0 Oreo on the OnePlus 5T is expected to make the overall package an attractive piece of hardware. 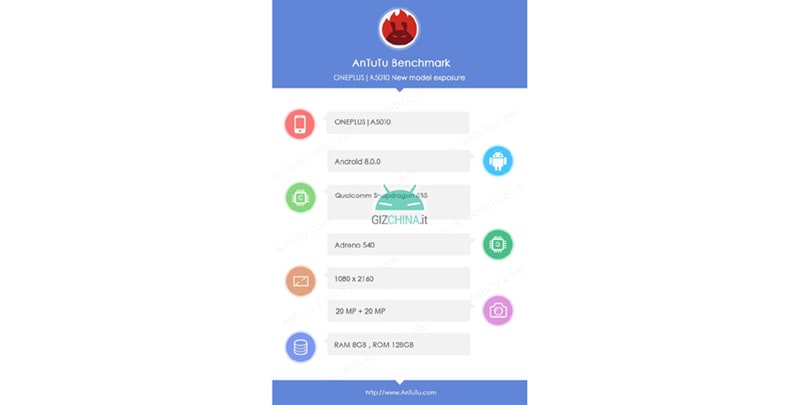